Information Circulars do not have the force of law.

The payroll tax nexus provisions determine in which Australian state or territory (jurisdiction) payroll tax is to be paid in respect of payments made to workers operating in more than one jurisdiction in a month.

In June 2009, all jurisdictions agreed to introduce amendments to the payroll tax nexus provisions, which would apply retrospectively from 1 July 2009. All jurisdictions have passed the legislation to implement the new rules.

This Information Circular explains the new nexus rules and also clarifies the circumstances when wages must be declared in South Australia for payroll tax purposes including wages paid for services performed in another country (or countries).

This Information Circular must be read in conjunction with the attached Flowchart which explains how the various scenarios will be treated and shows the circumstances in which wages are taxable in South Australia.

For the purpose of this Information Circular, overseas means outside all Australian jurisdictions.

It is important to note, that the liability for South Australian payroll tax must be considered separately for each calendar month.

To determine whether the wages paid or payable in respect of each monthly return period are subject to payroll tax in South Australia, section 11 of the Act requires an employer to determine the place where the employee has wholly performed services in a calendar month. Where an employee has not wholly performed services in South Australia, the following factors also need to be considered:

Determining where wages are taxable - section 11

Sections 11, 11A, 11B and 11C of the Act assist employers in determining where wages are liable to payroll tax.

Where services are performed wholly in one jurisdiction

If services are performed wholly in one jurisdiction in the relevant month, payroll tax is payable in that jurisdiction.

This looks at the place where services are performed by the employee in the month that the wages are paid or payable even if that place is not where the employee usually performs services. For example, wages paid to an employee in June 2010, who ordinarily performs services in South Australia, but in June 2010 performed services wholly in Victoria to complete a temporary project would be taxable in Victoria.

If services are performed in a calendar month in more than one jurisdiction and not overseas or in one or more jurisdictions and overseas, the new provisions provide a tiered test for determining payroll tax liability.

Payroll tax is payable in the jurisdiction in which the employee’s principal place of residence (PPR) is located.

If an employee has more than one PPR in the relevant month, the employee’s PPR on the last day of that particular month is the one taken to be the PPR.

If an employee does not have a PPR in an Australian jurisdiction during the relevant month, payroll tax is payable in the jurisdiction where the employer has their registered ABN address.

If the employer has more than one PPB in a relevant month (for example, when an employer changes their PPB address part way through a relevant month) the PPB is the address on the last day of that particular month.

Where wages are paid or payable

If wages are paid or payable in a number of jurisdictions, payroll tax is paid in the jurisdiction where the largest proportion of wages is paid.

Employees working in another country - assignment for less than 6 months

Employees working in another country – assignment more than 6 months

Wages are exempt if the employee has worked in another country for a continuous period of more than 6 months (that is, the exemption from payroll tax applies for the whole assignment, including the first 6 months). The 6 month period does not have to be within the one financial year but must be a continuous period. Where an employee, working in another country, returns to Australia in the following circumstances, it will not be considered to be a break in continuity:

If an employee returns to Australia in any other circumstances, the 6 month period will recommence from the date that the employee recommences work in the overseas country.

Any wages that relate to services performed offshore and beyond the limits of any Australian jurisdiction, but not in another country, are taxable if they are paid or payable in South Australia irrespective of the duration of the assignment. As such the exemption that applies to wages paid or payable in South Australia in relation to work performed in another country is not applicable.

Wages paid in a foreign currency

When calculating the value of the payment, RevenueSA will accept an exchange rate conversion, based upon the Reserve Bank of Australia’s daily rate published, for the day of payment. If this creates difficulties, the employer may use, as an alternative, the yearly average rate for the financial year, as published by the Australian Taxation Office. The previous year’s figure may be applied for the purpose of making monthly returns, provided that the current year’s rate is used to make an appropriate adjustment in the Annual Reconciliation return.

Section 11 also details a number of other factors that employers may need to take into account (in conjunction with the tests previously outlined) above in determining when and where their payroll tax liability arises.

Where wages relate to services performed by an employee over several months (for example, an annual bonus), payroll tax is payable in the jurisdiction where the services were performed in the month the wages are paid or payable.

If wages are paid in a different month from the month they are payable, liability arises in the earlier of the two months. For example, wages are paid in August 2010, but under the contract with the employee those wages should have been paid in May 2010 in South Australia. As May is the earlier month, the payments are taxable for May in South Australia based on where the services were performed.

If there are 2 or more payments in one month

There may be instances where an employee receives two payments of wages from the same employer in one month. The payments may relate to services being provided wholly in one jurisdiction or in two or more jurisdictions.

There may be instances where services are not performed in a particular month in which the wages are paid. In such circumstances, the liability for payroll tax is determined by ascertaining where services were provided for that employer during the most recent month.

If no services were provided to the employer, payroll tax would be payable in the jurisdiction where it could reasonably be expected that the employee would provide services.

For further guidance, please refer to the flowchart 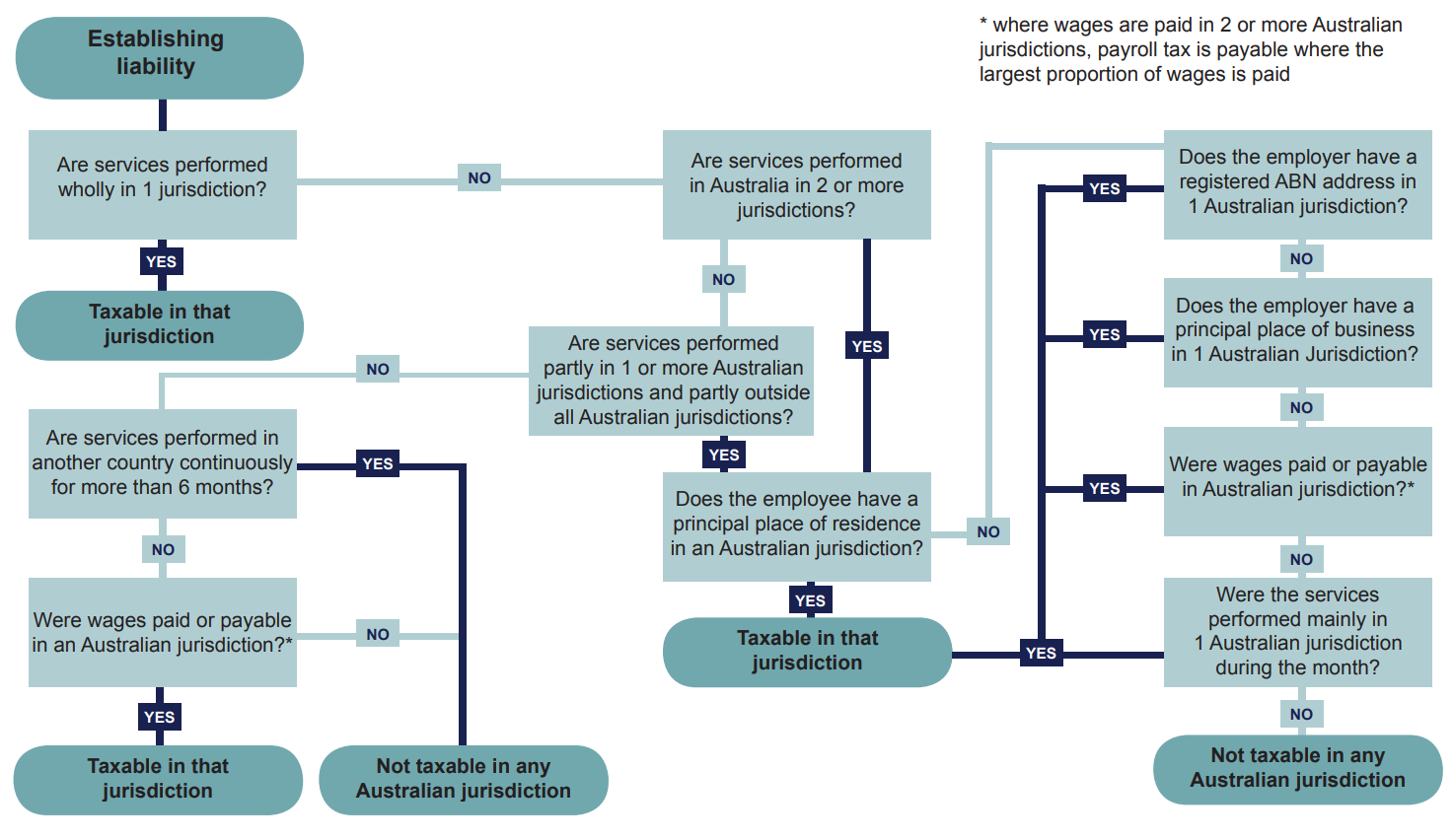 Payroll tax liability for the grant of a share or option are also governed by the new nexus rules contained in Section 11 of the Act and explained in this Information Circular.

However, certain circumstances relating to shares and options attract different nexus rules. These are outlined below (please note the flowchart does not apply in the circumstances below).

Section 26 of the Act identifies the place where wages are payable when a share or option is granted. Section 26 applies in the following situations:

In these situations where the grant of a share or an option constitutes wages, the shares or options are taken to be paid or payable in the jurisdiction where the share is a share in a local company.

View this Information Circular as a PDF (PDF 263KB)